The history of Oil City began in 1796 when the state of Pennsylvania gave 1,500 acres of land along the west bank of the Allegheny River in Warren County, as well as a small tract on both sides of the mouth of Oil Creek, to Cornplanter, chief of the Wolf Band of the Seneca nation, in compensation for his services during the American Revolutionary War. The first white settler in what became Oil City was an unknown individual who cleared and farmed roughly 400 acres on the west side of Oil Creek upstream from Cornplanter's land. Francis Halyday purchased this land in 1803, and settled there with his family.

On January 13,1809 James Halyday became the first white child known to be born in the area. Soon other families settled on the east side of the creek above the "Cornplanter Tract". Cornplanter sold the eastern half of his tract to two white settlers, William Connely and William Kinnear, in May 1818. Connely sold his quarter of the original tract back to Cornplanter in October 1818, but the land was seized by the county for nonpayment of taxes and sold at auction in November of the following year to Alexander McCalmont. McCalmont would go on to sell this land to Mathias Stockberger in the spring of 1824. 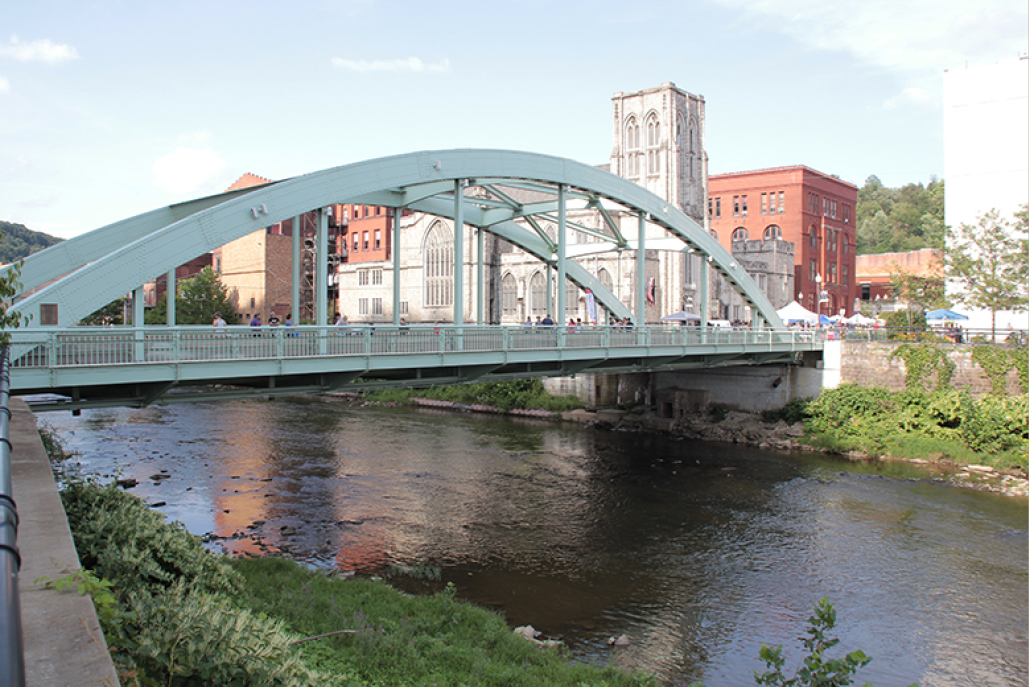 On June 25, 1824, Kinnear, Stockerberger, and settler Richard Noyes formed the company William Kinnear & Co., which erected an iron bloomery, foundry, gristmill, and several warehouses. Homes were constructed for workers, and the Allegheny River facilitated a steamboat landing. This settlement became known as Oil Creek Furnace. In January 1825 the original incorporators of William Kinnear & Co. were bought out by brothers William and Frederick Crary in January 1825. The company was eventually purchased in February 1835 by William Bell, who changed the corporate name to W. Bell & Son. He and his son, Samuel, operated the furnace until 1849, at which point the operations became unprofitable due to the poor quality of iron ore in the area. The settlement was soon deserted by all but the Bannon and Halyday families who chose to remain in the area.

Although the village of Oil Creek Furnace was largely deserted, settlement continued in the area. In August of 1840,  a large amount of land was patented east of Oil Creek and north of the Allegheny by Benjamin Thompson. Before long this land was subdivided and sold to other settlers. About two years after the passing of his mother in 1844, James Halyday sold his land to several settlers including Dr. John Nevins. Dr. Nevins was a physician and the first to practice medicine in the area. In the early 1850's another 200 acres of land was patented by James Hollis south of the Allegheny River. Hollis also went on to purchase Thompson's remaining land in January of 1853, then in turn sold all of his land later that year to Henry Bastian.

For many years the Bannons and Halydays rented rooms in their homes and space in their barns to bargemen and rafters using the landing at the bend in the river. In the early 1850s, Thomas Moran settled in the area and built a large inn known as Moran House next to the Bannon home which expanded due to its popularity and eventually became a local landmark. Soon thereafter two more inns opened as well as a general store on main street. Around this same time settler Hiram Gordon opened the area's first saloon, the Red Lion, near the mouth of Oil Creek. In June 1856, 1,000 acres of property was sold by the Bell heirs to Graff, Hasson & Company. James Hasson, son William Hasson, and William's family took up residence on the tract and began farming.

Drake and the Oil Boom

The most well-known part of Oil City's rich history began in late August 1859 when Edwin L. Drake drilled the first commercially successful oil well in nearby Titusville. At this time what would become Oil City had fewer than six families who resided there. This would change with the continued discovery of oil in the area as less than two years after Drake struck oil in Titusville, Phillips & Vanusdall struck oil on the Downing farm south of the river. By the late 1860's numerous boomtowns spawned from the discoveries including Oil City, Petroleum Center, Pithole, Rynd Farm, and the aforementioned Titusville. With the dominance of the oil trade taking hold, industrial facilities such as a machine shop, warehouses, and others were constructed west of Oil Creek. This waterway was used to transport oil into Oil City where it would then be exported to other locations such as Pittsburgh.

In the same year, oil was struck in Titusville, Michigan Rock Oil Company purchased Dr. Nevin's land, where they went on to build Main Avenue and platted an unnamed town around it. On March 26, 1863, William L. Lay purchased Henry Bastion's land and established a ferry near what is now the foot of Central Avenue. Lay went on to platt a town near his ferry's landing on the south shore, which was named Laytonia. The same year, Charles Haines and Joseph Martin bought out the Hassons and graded Grove Avenue. Haines and Martin constructed multiple homes along the street, creating a settlement they called Cottage Hill. In 1864 part of Cottage Hill as well as an adjoining 300 acres of land was purchased by the United Petroleum Farms Association, who subdivided the land into lots and quickly built homes. One year later, Vandergrift, Forman & Company, a petroleum exploration firm, bought the property of a number of settlers around the north landing of Lay's Ferry and established a town the company called Imperial City. West of Laytonia, Charles Lee established a settlement called Leetown.

In 1862, residents in the area obtained a charter from the state, uniting the area north of the river as a borough named Oil City. South of the river, growth was erratic. Streets were disorganized, creating a quagmire for transportation, and there were too many names being used for the area, creating further confusion. In 1866, the citizens of the borough south of the river petitioned Judge William G. Trunkey to give their borough a common name. He selected Venango City. By this year, Venango City had a population of more than 1,500, and Oil City's population surpassed 4,500 people.

By 1870, residents of the two boroughs desired unification as the area continued to grow. On March 3, 1871 the state granted a town charter by the legislature, and Oil City was selected as the name for the newly merged boroughs. The first Oil City elections were held in April, and the first mayor, William M. Williams, was sworn in on April 11 along with a 12-member city council, thus completing the incorporation of Oil City. It wasn't until after the turn of the century that Oil City would be joined by Siverly in 1911 and the West End Borough in 1916.

Oil City grew into a thriving community through the later half of the 19th century and into the 20th century. By the 1990s, Pennzoil, Quaker State, and Wolf's Head had all relocated their headquarters elsewhere. However, some oil wells continued to produce a steady supply of quality petroleum.

In modern days, regional governments and public organizations promote tourism through the education of oil history in the area. Oil City's location along the Allegheny River in the foothills of the Appalachian Mountains provides excellent opportunities for exploring Northwestern Pennsylvania. The City is also home to multiple historic districts with a plethora of locations listed on the National Register of Historic Places such as the National Transit Building and the Oil City Armory. 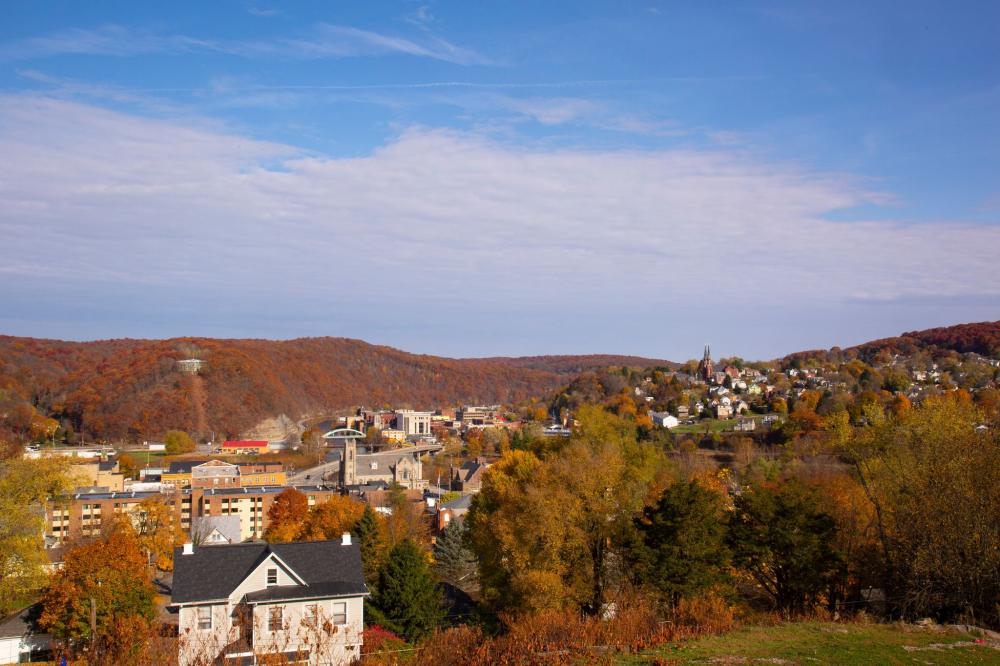 ❮❯
Get Involved with Your Community!

Explore events, programs, and current community projects happening throughout Oil City. Read the history of this great community and get involved today!